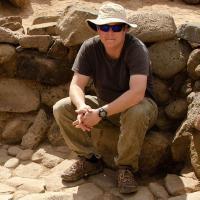 My research focuses on three aspects: the consequences and effects of climatic change on past societies, past foodways, and the emergence of social inequalities. As an archaeologist, I investigate these topics in the early human past, specifically, during the transition from hunting and gathering to agriculture in southwest Asia, between c. 20,000 – 8,500 years ago. Related areas of interest are lithic technologies and use-wear analysis, landscape archaeology, and the relationship between the past and modern-day politics.

I am interested in how societies in the past responded to global climatic change. Specifically, I investigate what impact the Younger Dryas climatic event (c. 13,000 – 11,600 years ago) had on late Pleistocene hunter-gatherers in the Middle East, and whether the arid and cool conditions associated with this downturn pushed societies to adopt plant cultivation. To investigate this I initiated two fieldwork projects in the arid region of northeast Jordan (https://shubeika.ccrs.ku.dk/) and the intermontane highlands of the central Zagros (https://tcec.ku.dk/). This research combines archaeological fieldwork with archaeobotanical, zooarchaeological and palaeoclimatic studies to reconstruct the impacts of climate changes on settlement patterns and economy.

I am also curious about past foodways, i.e. the relationship between culture, diet, nutrition and health. The transition from hunting and gathering to agriculture in southwest Asia was fundamentally a change in how people obtained food and how they processed ingredients in new ways. My current project Changing Foodways in Prehistoric Southwest Asia: Reconstructing food procurement, processing and cooking during the Epipalaeolithic-Neolithic transition (funded by the Frie Forskningsfonden Danmark) investigates this question through an inter-disciplinary approach that brings together use-wear and residue analysis of artefacts, zooarchaeology, archaeobotany and experimental archaeology.

An emerging area of interest, which is also tied to foodways, is the study of social inequalities at the end of the Pleistocene and during the early Holocene in southwest Asia.

I also have an interest in the role of heritage in negotiating political identities in the Middle East, and the history of archaeology in the region.

I direct the Centre for the Study of Early Agricultural Societies at the Department of Cross-Cultural and Regional Studies, which brings together a number of postdoctoral researchers and PhD students interested in the study of the transition to agriculture in prehistory.