Hidden Treasures: The Cuneiform Collection of the Danish National Museum

The project Hidden Treasures is a collaboration between the Department of Cross-Cultural and Regional Studies at the University of Copenhagen and the Danish National Museum. Hidden Treasures will analyse, publish, and digitize the collection of cuneiform tablets at the Danish National Museum in order to make the collection available to a wider audience of specialists and non-specialists alike.

Some of the world’s oldest text manuscripts come from ancient Iraq and Syria, where small pieces of clay were inscribed with what is now called cuneiform script. With the rediscovery of the ancient Near East in the 18th and 19th centuries, more and more such manuscripts were unearthed, which led to the decipherment of the cuneiform script in the middle of the 19th century and the discovery of now extinct languages, such Sumerian, a linguistic isolate, and Akkadian, the oldest Semitic language. 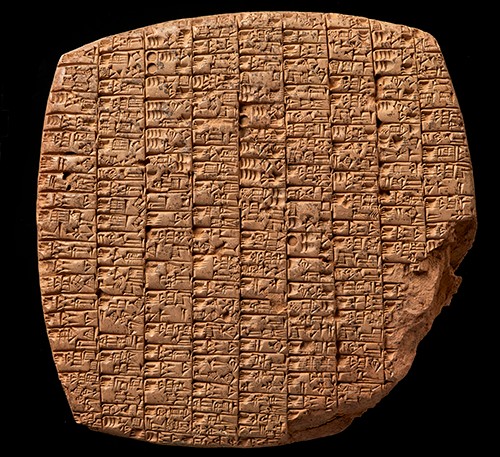 Cuneiform writing was invented around 5000 years ago in ancient Mesopotamia, the area that is today Iraq and Syria. Cuneiform writing was impressed onto small clay tablets using reed styluses. The invention of writing enabled the development of complex societies and cities, ancient bureaucracies, but famous examples of world literature, such as the Epic of Gilgamesh and the Flood Story, which was later reused in the Old Testament of the Bible, as well as religious texts are also part of the written corpus, thus offering fascinating insights into ancient history. Danish interests in the ancient Near East began with the well-known Arabian expedition by Carsten Niebuhr (1761-67), during which Niebuhr produced the first reliable copies of cuneiform inscriptions in Persepolis. His copies later made the decipherment of cuneiform writing in the middle of the 19th century possible.

Cuneiform inscriptions at the National Museum of Denmark

Today, the Danish National Museum contains the largest Danish collection of cuneiform tablets. The collection has been established during the past 200 years and illustrates Denmark’s role in the exploration of the Middle Eastern cultural heritage. Several of the texts in the collection are unique, attesting to the collection’s importance. The cuneiform tablets in the Danish National Museum constitute a varied collection, of which some texts are more than 4.500 years old. The content of the manuscripts include everyday economic documents and private letters, as well as texts with religious, literary or magical and medical content.

What is the project about

The project Hidden Treasures will examine the individual manuscripts and publish a comprehensive catalog of the collection in order to make the original sources available to researchers internationally. Some previously unpublished groups of text will be examined, analyzed and published by individual project members. The project includes a complete survey, cataloging and digitization of all the National Museum's cuneiform tablets as well as objects with cuneiform writing (eg reliefs).

The National Museum’s collections contain two important groups of texts from Danish excavations of the north Iraqi site Tell Shemshara, excavated under the direction of Harald Ingholt and Jørgen Læssøe in 1957, and the ancient Syrian city Hamath, excavated under the direction of Harald Ingholt from 1931-1938  Today, around 80 manuscripts from Tell Shemshara and 9 manuscripts from Hamath are located in the Danish National Museum. The former group of texts consist mainly of letters, which were part of a political correspondence between a local leader known as Kuwari and the Amorite-Assyrian king Shamshi-Adad from around 1.800 BCE, as well as several administrative documents. The latter group of texts stem from ca. 1.000-720 BCE, and they contain letters, as well as magical or medical texts. Although the excavations of Hamath only yielded few manuscripts, the content is unique in terms of the lack of scholarly texts from this region in the first half of the first millennium BCE.

Assyriology, the scientific study of cuneiform tablets, has a long and important tradition, both in Denmark and internationally, and Danish Assyriology has traditionally had strong international ties and collaborations. The collaboration with the National Museum of Denmark will also contribute to the museum’s strategy to protect and strengthen the world’s cultural heritage.

An important goal of the project is the digitization of the National Museum’s cuneiform collection, which will be added to the Cuneiform Digital Library Intiative (CDLI), an international digital humanities project of the University of California at Los Angeles (UCLA), the University of Oxford, and the Max Planck Institute for the History of Science in Berlin. CDLI has in the past 20 years built an electronic database of the world’s cuneiform inscriptions, estimated to exceed 500,000 objects. CDLI has so far catalogued about 320,000 objects from around the world.

Some of the world’s most famous museums have already contributed to CDLI, such as the British Museum, the Musée du Louvre, and the Vorderasiatisches Museum zu Berlin. Making the Danish National Museum’s cuneiform tablets available on this platform enables researchers to search through large amounts of data and effectively find relevant manuscripts, text passages, and even individual words in the many similar collections of cuneiform texts.

Publication of a group of remarkable unpublished texts: The city of Hama, known from the Bible as Hamath, was excavated by a Danish expedition from 1931-38, and today the objects from this excavation are located primarily at the Danish National Museum. Among the most interesting finds are 17 cuneiform tablets consisting of letters, medical prescriptions and magical rituals from around 1.000-720 BCE. These manuscripts are unique, since this period has only yielded few cuneiform tablets with comparable content from this region

The economy of the wool industry of the Eanna temple in Uruk
Contact: Rasmus Aarslev

PhD project seeking to investigate socio-economic structures in the Neo-Babylonian period (c. 610-539 B.C.). The project is based on primary sources from the temple of Eanna in the ancient city of Uruk, which was among the largest economic institutions in the southern region of Mesopotamia during this period, and the analyses will elucidate the relationship between state polity and local economy. In 1956, a small group of relevant primary sources was donated to the National Museum in Copenhagen by the Iraq Museum in Baghdad. In collaboration with the National Museum, the project will translate and analyse the contents of these cuneiform tablets for the first time since their excavation and contextualise them within a broader economic setting.

The project is funded through the generous support of the Carlsberg, Augustinus, and Edubba Foundations.