Copenhagen Centre for the Study of Theosophy and Esotericism (CCSTE)

The Copenhagen Centre for the Study of Theosophy and Esotericism offers a distinct opportunity for students and scholars alike to focus on influential, yet still vastly overlooked, aspects of European and global intellectual, religious and social history often categorized as ‘Western esotericism’.

Ideas, thinkers, practices and groups related to terms such as esotericism, esoteric traditions, occultism, theosophy, kabbalah, alchemy, astrology, magic, the supernatural, gnosis and secret knowledge are not as obscure as they might seem at first sight, but have been significant and highly influential facets of human culture.

For example, it is less known: that the great philosophers of antiquity such as Pythagoras, Plato and Aristotle all divided their teachings into a public or exoteric exposition and an esoteric one only available to the initiated; that significant theologians from the Byzantine empire and the Western Middle Ages, such as Michael Psellus and Albertus Magnus were engaged with magic, the study of demons and occult sciences; that so called magicians helped develop the experimental method prominent in modern science; that the collection of texts from late antiquity known as the Corpus Hermeticum influenced the development of humanism, the modern concept of man, Renaissance art and the emergence of modern science; that several courts of Europe had a prominent astrological counselor, such as John Dee at the court of Queen Elizabeth I; that philosophers such as Leibniz and Hegel also studied Kabbalah and hermeticism; that the discoverer of the law of gravitation, Isaac Newton, was preoccupied with alchemy; that H.C. Ørsted, the discoverer of electromagnetism, was a freemason; that many modern scientists such as Alfred Wallace, the co-formulator of the theory of natural selection, and the pioneer chemist and inventor William Crookes believed in communication with spirits; that the Russian Helena P. Blavatsky and the modern Theosophical Society, she co-founded, directly influenced modern abstract art, archeological expeditions and India’s independence.

The impact of this continued ‘revisionist history’, when brought to its full potential, when categories such as esotericism and occultism are scrutinized and the forgotten entanglements between what we term esotericism, religion, philosophy and science are historically and critically revisited, is no less than revolutionary for our understanding of the past and present and for understanding the discursive mechanisms in play when dominant categories are constructed and histories told.

This centre is particularly dedicated to teaching and research related to modern Theosophy, Helena Petrovna Blavatsky (1831-1891) and the history of esotericism.

The disciplinary frame of the Science of Religion under the Institute for the Study of Cross Cultural and Regional Studies at the University of Copenhagen is especially suited for this new development of research and teaching related to esotericism as several local scholars work on modernity, cultural interchanges, alternative traditions, and intellectual history.

The center is particularly dedicated to research projects related to Blavatsky, Theosophy, and the history of esotericism in general. Themes include: interactions between East and West and relations between science, religion, philosophy and esotericism.

The center is dedicated to offering a full course related to esotericism each semester. Courses are taught in English and are internationally available to all academic levels (BA, MA, PhD). It is possible to follow the courses in class on location or as distant learning courses as all teaching is recorded and available online. Themes include the Theosophical movement, esoteric traditions, hermeticism, Platonism, Kabbalah, the cultural history of magical practices, esoteric knowledge systems, mysticism, Christian theosophy, gnosis, secrecy and secret societies. Specialized supervision is equally available at all academic levels.

The center is cooperating with similar initiatives, particularly in Scandinavia and has also an Erasmus agreement with the Faculty of Theology and Religious Studies at the University of Groningen, the Netherlands.

The centre is funded by the Blavatsky Trust.

The center sponsors a number of student activities, such as The Not So Secret Club organized by Bjarke Stanley Nielsen, which include student lectures, social activities, movie nights, visiting esoteric groups and a student journal Pan-Sophia representing the best scholarly work done by students in relation to the courses offered by the center. 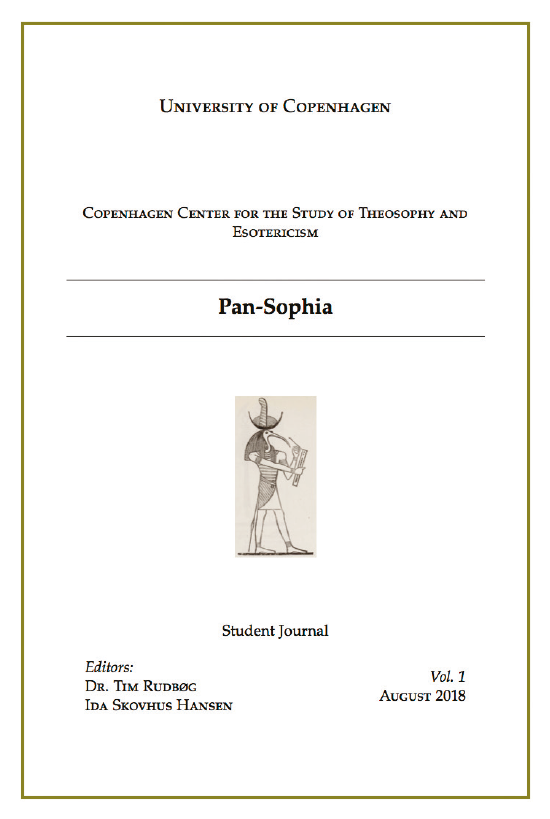