Archiving the Future: Re-Collections of Syria in War and Peace

This research project makes the representation of Syria in war and peace the object of an ethnographic inquiry of image construction. It examines how images and memories reconfigure what Syria was and is and what it is in a process of becoming for Syrians themselves by focusing on the active establishment of archives and the processes of archiving. 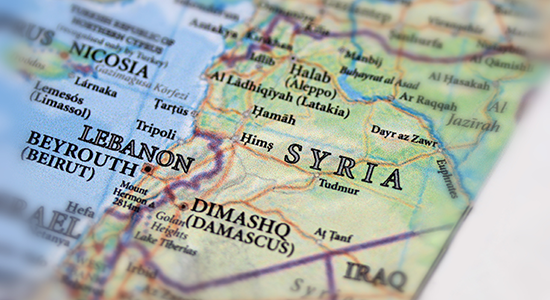 The project is a critical contribution to rethinking unstable temporal orderings of past, present, and future as it engages the question of how to theorize futurity. Hence, the research questions are: How do archives come into being, and how do they shape, regulate, and change perceptions, memories, and potential futures?

Arguably, no war has been as well-documented visually as the ongoing war in Syria. Photos, videos, and posts on social media have been an instrumental part of the war as well as its documentation. Images of people taking the streets, of slogans written on walls and banners, and later photos of destruction, killed and mutilated bodies, and refugees in great numbers escaping havoc have long established the Syrian civil war as a topos for global reflection and concern. However, this turbid flood of visual images needs unpacking if we are to understand what Syria was, is, and might become beyond the immediate sense of death and destruction. Despite the excess of visual documentation of the Syrian war, the actual processes whereby some images come to capture, embody, and produce what Syria was, is and is to become for Syrians themselves remain understudied.

This ethnographic research project makes up for this neglect by exploring how Syria is being re-collected by various Syrian actors across personal, collective, and institutional forms of visual representation. With this project, we explore how these images of Syria constitute what we designate archives of and for the future. Exploring the formation of these archives will enable us to understand not just how war, crisis, and conflict but also how peace, reconciliation, and coexistence are negotiated as future possibilities in a recreation and refiguring of a country moving beyond conflict.

The central contention of this research project is that Syria offers an exemplary case to reflect on the power of images and how processes of archiving enables a grip, not merely on the past, but also on the present and the future. The project is a critical contribution to rethinking unstable temporal orderings of past, present, and future as it engages the question of how to theorize futurity. Hence, our research questions are: How do archives come into being, and how do they shape, regulate, and change perceptions, memories, and potential futures? How is the image of Syria re-assembled, remade, and re-mediated by Syrian actors across personal, collective, and institutional contexts? And how do political changes in the present impact on the reading and use of the past in the creation of viable futures?

Cellphone use has been instrumental in how the Syrian uprising was organized and planned, and the cellphone continues to be a central device not merely for communication in families spread across continents but also for keeping track of day-to-day developments, for storing personal photos and videos, and for reconnecting with a lost homeland. This subproject therefore employs cellphone use as a pertinent lens through which to explore personal archiving and image use. In conversations and interviews with Syrians, cellphones are typically used to show images of past life and of current family.

Contrary to much theorization, which addresses distance as critical for the reading of photos and images (Chouliaraki 2013), this subproject takes its cue in the opposite, namely that such personal archiving revolves around intimacy and personal prehistory (Barthes 1982). Engaging with photos of dear ones and with places imbued with personal memories and longings opens up a space of pensiveness (Ranciére 2007, 2009). Accordingly, in making cellphone use the object of interrogation, this subproject explores how personal archives are shaped and how these enable different orderings of the past, present, and future. Empirically, this subproject focuses on five Syrian family networks in Lebanon and five Syrian family networks in Denmark and follow their reach across national borders.

Bandak has extensive networks among Syrian refugees in Lebanon, where he has worked since the onset of the civil war, and he also has solid networks among Syrians in Denmark. He will draw on these networks when soliciting the families that will inform this subproject. Methodologically, the subproject takes a point of departure in fieldwork in both countries to follow actual storage and circulation of images. By locating this study firmly in everyday settings within various Syrian family networks, we can explore the personal registers of image sharing and storage. This study thus explores the local hermeneutics of image interpretation and image construction.

This subproject investigates collective archiving as a vernacular practice by taking into account the broad range of actors involved in the event of photography (Azoulay 2016). The empirical focus of this subproject is Syrian Archive (syrianarchive.org) and its partners.

Syrian Archive is a Syrian-led, Europe-based collective of human rights activists. They work to identify, collect, preserve, verify, and publish images of human rights violations and other crimes committed by all sides in the conflict. Syrian Archive collaborates with a broad range of actors, including organizations such as WITNESS and International Media Support (IMS) to train photographers and develop methods of verification. They host a rapidly growing archive of over 3.300,000 collected digital videos and images. When put together, these images form a forceful, collective archive of the war, creating a potential for future justice. With the broad range of actors involved in this form of archiving, the authority and legitimacy of the images are not pre-established. Therefore, this subproject investigates the collection and use of these images, particularly in relation to procedures of verification and evidence (Engelke 2009), acknowledging this as a conversation, which draws into the past as well as the future.

Methodologically, the subproject makes use of participant observation with Syrian Archive staff and their partners. The subproject will draw on Mollerup’s previous research with photographers from Aleppo, including from the Aleppo Media Center, who have contributed to Syrian Archive, and her longstanding organizational relationship with IMS.

This subproject explores institutional archiving by looking at the widely viewed Beirut-based pan-Arab news TV station al-Mayadeen. In contrast to the main flow of images that have been coming out of Syria throughout the war, al-Mayadeen has consciously promoted a nostalgic and patriotic image of Syria. War and conflict are thus accompanied by a narrative of a civilized and proud nation, where everyday life continues. Al-Mayadeen uses the latest political and military stabilization of the country in Bashar al-Assad’s favor as validation of its own narrative. This is a narrative, which cannot be overlooked when engaging in a serious conversation about a future Syria.

This subproject explores how al-Mayadeen actively attempts to reconstruct and monopolize nostalgic images as a way to control how Syria is imagined (Özyürek 2006). Thus, the subproject explores how existing images of Syria are reconstructed and come to hold new meanings in a context of war, national division, and parallel realities (Salamandra 2004, Abu-Lughod 2005).

Methodologically, this subproject explores the institutional archiving at al-Mayadeen through participant observation, interviews, and content analysis with a focus on selected programs (Born 2004). The programs are available at www.almayadeen.net as part of the station’s growing archive containing broadcasts dating back to its launch in 2012. Using not only programs but also, and more importantly, the people around them, the editing processes, and various off-screen activities, this subproject investigates how institutional archives produce particular pasts and futures as viable temporal orderings. Crone’s previous work on discourse analysis of al-Mayadeen’s ideology and content and her networks in and around the station will ensure that this subproject moves behind the screen by way of in-depth interviews and participant observation.